Oncrawl gets a new look

It’s been one year since we released our new brand identity, and the Oncrawl platform is finally catching up! After a year of work to bring you a new, clean, and exciting interface, it’s finally ready for you to enjoy.

Even better, the changes to the interface are more than just a change of colors: they’ve also been designed to begin to address usability questions and standardization issues related to current and future developments.

Almost exactly one year ago, we announced a new branding, along with the release of the Genius suite of data science and machine learning-based products. This brought with it new colors, a new energy, and a new logo.

These have all been included in the Oncrawl platform, so you can feel more at home.

We want to make sure we put our users first. Although colors, fonts, and style have changed, you should feel at home for now.

We’ve made no changes to the placement of platform elements. You can find all Oncrawl features through exactly the same paths, buttons, and shortcuts as before. On the different platform pages, you’ll see that no elements have been deleted – or even added. We’ve just used standardized design to make the purpose of each element and the flow of each platform screen clearer for you.

Improvements to design make fields you need to fill out, help text, and explanations more visible.

If you’re a long-time user and very reliant on the old visual interface, we’ve prepared a help article for you, so you can compare the before and after of main interface screens and smooth the transition.

More than looking pretty, the goal is to make Oncrawl easier to use and to understand. While this will take multiple steps, this interface make-over lays the groundwork for all of the next steps.

Based on user feedback and testing, we’ve improved the way we build an interface in Oncrawl. Using standard positioning, coding, and visual signals for each element in the interface, it’s now easier for you to identify functions, features, and other elements. New colors for standard charts are more accessible and easier to differentiate.

Our Product Designer, Marie Nauleau, spoke about her process and goals in a recent webinar. 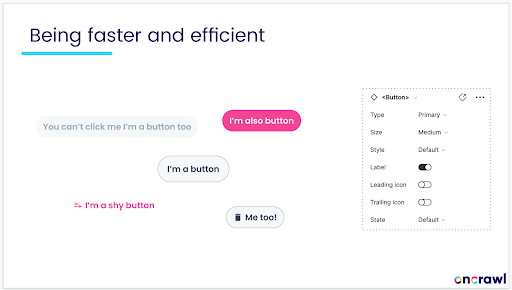 Until now, Oncrawl was built on a publicly available front-end library: a great way for an application to get off the ground. We’re excited to move to an entirely new library, unique to Oncrawl and our vision of technical and data SEO.

The custom design system we’ve built to accompany this new look and feel covers everything the old library did, and allows Oncrawl room to grow. We’re extremely excited about how this new look and feel opens the door to upcoming platform changes – from big new features, to user-oriented modifications and specific usability improvements.

If you’re an Oncrawl user, you’ll see the new user interface as soon as you log in, as of today. If you’re not an Oncrawl user yet, there’s no better time to test the platform!

Find out for yourself why Oncrawl is the most recognized technical and data SEO platform on the market! No credit card required, and no strings attached: just 14 days of a full-featured trial.

Rebecca Berbel See all their articles Become an Oncrawl author
Rebecca is the Product Marketing Manager at Oncrawl. Fascinated by NLP and machine models of language in particular, and by systems and how they work in general, Rebecca is never at a loss for technical SEO subjects to get excited about. She believes in evangelizing tech and using data to understand website performance on search engines. She regularly writes articles for the Oncrawl blog.
Related subjects: